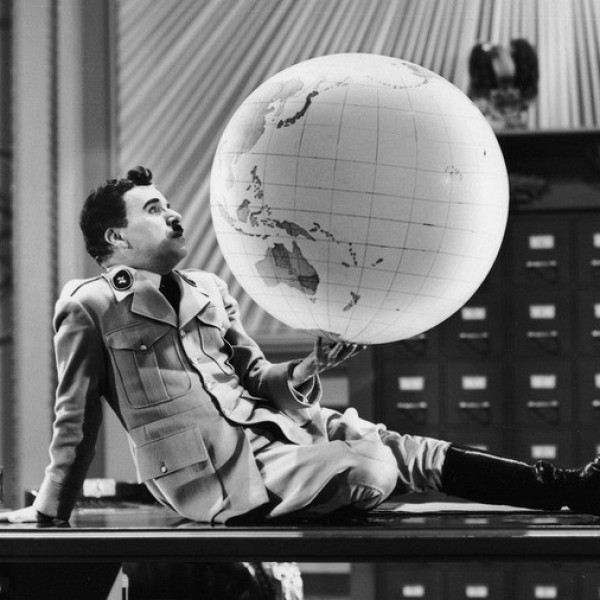 Yesterday, I went online and watched that famous scene from the Charlie Chaplin movie “The Dictator” wherein Chaplin, impersonating a Hitler-like character, dances around a room, tossing a balloon globe into the air. He seems drunk with power. The United States had not yet entered WWII, and this image of a pompous dictator with the funny mustache “controlling” the world probably seemed far-fetched and laughable to its audience at the time. Within two years after this movie was made, the U.S entered the war, and I doubt people thought Hitler was a joke by then.

They say the pen is mightier than the sword, and throughout the centuries, satire and humour have been effective weapons to expose the shortcomings of mankind. I believe political satire is one of the foundations of a free society, and sometimes, there is no more effective weapon to expose ignorance and boorishness. Dating back to mid-19th Century England, Punch Magazine poked fun at the political status quo, both in cartoons and print. In fact, Punch may have featured the first widely disseminated political cartoons. Over the years, political satire evolved into something a little less subtle. In my youth, I was a long-time subscriber to Mad Magazine, which among other subjects, poked fun at politicians. I also had a subscription to National Lampoon, which was a little more off colour and biting.

These days, television and the internet are the popular mediums for political satire. SNL pokes its fun at politics, both in its opening skits and in its Weekend Update segments. I remember Chevy Chase portraying a bumbling Gerald Ford, Dan Akroyd mocking Jimmy Carter, Dana Carvey making fun of George H. Bush, and most recently, Alec Baldwin offering his disturbingly accurate portrayal of the ludicrous Orange Emperor. I think these skits that lampoon the hypocrisy of politicians are healthy. I enjoyed Bill Maher’s edgy show “Politically Incorrect” before it went a little too far and was pulled from the air. I was also a big fan of Jon Stewart’s “The Daily Show”, which launched the comedy careers of comedians like Stephen Colbert, John Oliver, and Steve Carell. I suspect I learned more about current events from Stewart’s show than I did from clearly biased network and cable news shows. Although I do not watch Stephen Colbert’s late night show regularly, I have been watching his recent opening monologues reprised on the internet. I think they are really good, and his satirical take on American politics is therapeutic to those of us who feel the world is spinning off its axis. His rants purge the rage and helplessness I feel when I see leaders behaving atrociously. Sometimes, there really is no other way to attack boorish, unreasonable, irrational behavior than to poke fun at it with acerbic wit.

We can argue about what is funny, and what is not, but I fear the point wherein we become so intractable, so adamant about our beliefs, that we can’t laugh at our own shortcomings. The Charlie Chaplin dictator scene to which I referred at the beginning of this report, ends with the balloon globe popping in the dictator’s hands, after which he throws a minor hissy fit. Does that sound familiar?