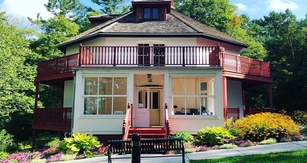 The public spoke out in the Bracebridge Council meeting on August 31, 2022, about concerns regarding the construction upgrades at Woodchester Villa (Bird Grove), at 15 King Street.

The primary concern is the viewing platform scheduled to be built this fall, and the removal of trees and impact on the natural habitat.

Town resident, Michael Opara, expressed concerns about 150-year-old trees planted in the 1870’s being cut and said, “Think about the deck in the middle of the woods…”

Neighbour of the villa, Mark Henry, said, “The tree cutting will change the growth patterns on the forest floor…putting the forest canopy at risk…destroying the feeling of the old Grove which attracted people in the first place…the view of the natural birds.”

Henry also expressed concern about the necessity to the added cost of maintaining and monitoring the area upon further development, adding that it will “lead to a policing issue regarding rules established, police patrols at night, and a maintenance budget.” He added that issues involving tourism could include “garbage, vomit, feces, drugs” which will have to be added into the budget, and that “it’s a financial risk to itself and surrounding areas… The conditions need to be respected and protected.”

Bracebridge resident, Liana Lepingwell, wrote a letter to Council indicating, “It is our understanding that a covenant is in place that states Bird Grove is to be left in a ‘natural state.’

Quebec resident, Margarat Bryant-Mahdi, submitted a letter to the Town on behalf of her mother who is a neighbour of Woodchester, and said, “Our specific concern is the risk of land slides, which, if spread to other properties on the hill overlooking the river, would undermine the integrity of my mother’s land and the structure of her home.” She inquired whether there were safeguards to prevent property damage from flooding and land slides, and measures in place for property owners affected by it.

Council agreed to have staff and the Planning and Development department look at alternative siting options and the impact of the stability of the bank, and report back about their findings.