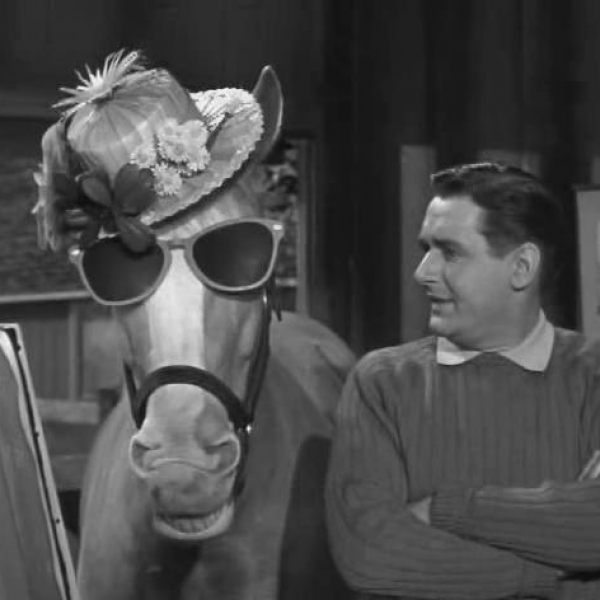 I’ve always had a thing for campy, bad television and movies. Sometimes, it drives Shauna crazy. I’m not proud of it, but I have learned to accept myself. I ask you, how can you go wrong watching an Ed Wood movie, or “Attack Of The Killer Tomatoes”? They’re going to make you laugh, and that’s a good thing. Back when I was a kid, I gravitated to the bad sitcoms. I vaguely remember watching the obscure sitcom, “My Mother The Car”, the Edsel of sitcoms. I also watched “McHales Navy”, “Gilligan’s Island”, “Hogan’s Heroes” (of course), “Gomer Pyle, USMC”, “My Three Sons”, “Mr. Ed”, “Batman”, “The Addams Family”, “The Munsters”, and probably most of the old sitcoms you might now find on Nickelodeon or internet sites like Amazon Prime Video and Netflix. The other day, I was flipping through the thousands of videos available on Amazon Prime and watched the very first episode of “The Real McCoys”. What a time capsule revelation that was! Even as a child, I knew those shows were not intellectually stimulating, but I was entertained. Then came reality television.
When it first emerged, reality television caught my interest because it was so strange and different. Here was an entirely new genre of terrible television, which by its very nature, highlighted the worst mankind had to offer. There didn’t seem to be anything real about it. “Survivor” and “Big Brother” were the two shows that I followed, but from time to time, I’d watch anything and everything that aired. The bar just kept getting lower, (along with my IQ) and the shows kept getting worse. Reality television represented the canary in the coal mine of entertainment, but like a train wreck, I simply couldn’t look away. I remember one show which followed some guy who was roughing it “alone” in some frozen northern wasteland. At some point, his snowmobile conked out, at night, when he had to walk perhaps ten miles back to his home. It was so strange watching that guy schlepping home, knowing that an entire camera crew was following him in heated trucks. After a while – and it took an embarrassingly long time -- reality television lost its allure, and I gradually weaned myself from it. Well, for the most part. I still follow Big Brother. I find the show fascinating; it is like a televised Skinner Box.
I’m not proud of myself. This whole pandemic thing has caused me to make some even more terrible television choices. Sometimes, it’s not a choice at all. Most of the time, I’m too distracted and anxious to sit through a feature length movie, so oftentimes, we just have the television on in the background while we’re doing other things. I’m trying to limit myself to an hour or less of “news” per day, because that has become reality television on steroids.
Last week, I might have inadvertently watched an entire episode of the worst reality television program I have so far encountered: “Love Island”. I was preoccupied writing something on my computer and the television was on. I wasn’t paying attention, but then the sheer stupidity of the program reeled me in. That show might be too awful, even for me. Keep in mind, I have watched more than one episode of “Jersey Shore”, so clearly my bar is pretty low. The old addiction came back, and I’ve put a call in for RTVWA (Reality TV Watchers Anonymous). I could not turn away. "Love Island" is another one of those musical chairs shows wherein young adults couple up and one by one are eliminated from “the game”. In this case, a bunch of singles pair up in a Las Vegas villa, and the drama unfolds from there. People are required to choose a mate on day one, and then, as time goes by, they swap partners and trash-talk each other. Oh the drama! Eventually, someone is deemed the odd man out and is summarily thrown off a high-rise balcony. Ok, I’m kidding about that part, but people get voted off.
I have no idea how dating works, Shauna found me eating scraps out of a dumpster behind Burger King and took me home, but I might be just a notch above these lovers in the romance department. The thing that most astounded me while watching those young adults discuss their matters of the heart was their anemic communication skills. I needed subtitles to follow the dialogue. I know I rant about this a lot, and I also know I wasn’t the king of communication when I was in my twenties, but the English language has really taken a tumble in the last couple of decades. When I watch television now or read copy in an advertisement, I feel like I am on another planet. Here's an example of the "Love Island" dialogue: “Hey Bro, did you, like you know, like her, or what? She was chill, right? Hyuh! Wha? Hyuh! Like, whoah, right? I know. Whuh? Yuh!” I believe that was, verbatim, what I heard.
I’m sure most of you have judged me harshly at this point, and what can I say in my defense? I yamwhatIyam. In about one month, I’ll celebrate my 65th birthday, and I seem to have stalled in the maturity department. Nevertheless, I am slowly learning to accept and embrace my inner 12-year-old.
But yaknow, that being said, like whuh, yaknow bro, like, dude, whoh. Mr. Ed is beginning to sound like Shakespeare to me. Tyuhh!
Written by Jamie Oppenheimer ©2020 ALL RIGHTS RESERVED
jamieoppenheimersongwriter@gmail.com