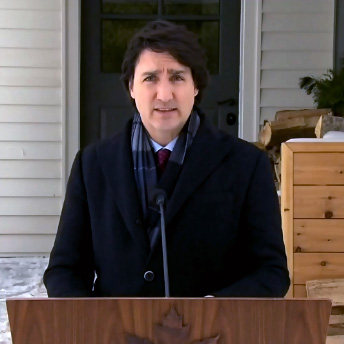 Letter To The Editor - Trucks And Tin Foil Hats

Letter To The Editor:

To say I'm not Justin Trudeau's biggest fan is putting it mildly, but after watching his press conference today, he has sunk to a new low in my estimation.

Trudeau's 15-minute speech was delivered in measured, paternalistic tones with well-rehearsed sincerity, and he managed to talk about "the importance of freedom, democracy and the rule of law" without a trace of irony.  The speech included, of course, the usual divisive language about "us" versus "them", those "who made good choices" versus "the fringe minority" (yes, he used that phrase again).  Trudeau spent an inordinate amount of time misrepresenting the protest as divisive and hateful (which I know from a friend who lives in Ottawa that it was not), focussing on the few trolls who showed up simply to cause trouble and discredit the message of tens of thousands.  He also made a point of threatening Opposition politicians who he claimed are "exploiting people's fears", urging them to "think long and hard about the consequences of your actions".  What was that all about?

But it was during the question period afterwards, when he was off script, that our Prime Minister's disdain for Canadians who do not support him came to the fore.

When asked why he refused to meet with the organizers of the protest even though he has attended protests in the past, Trudeau said he is only interested in listening to people he supports, whose goals he agrees with.  "Canadians know where I stand," he said.  He has no interest in any views other than his own.  As our Prime Minister, Trudeau doesn't have to agree with citizens, but in a rally of this size, he certainly needs to acknowledge them.

When asked if it's fair to focus on the bad behaviour of a few individuals and paint all protestors with that brush, the Prime Minister sighed dramatically and launched into another condemnation of inciting violence and spewing hatred, neither of which had happened.  As I mentioned, I have a friend who lives in Ottawa and she went to Wellington Street last night.  She said it was like a street party.  People of all ages, races, sexual orientation and religions (Indigenous, Sikhs) waving flags and signs, milling about, laughing and interacting with one another over the cacophony of the trucks' air horns.  She saw no vandalism, no violence, no hatred or racist imagery.  And Trudeau hadn't either.  He'd been in hiding (sorry, isolating) since before the first truck arrived.

When asked whether his government had pressured President Biden to implement vaccine mandates for truckers on the U.S. side as well, Trudeau avoided answering by talking about the effectiveness of vaccines and about governments keeping their citizens safe.  I would have liked a direct answer to that question.

When asked what he would like to see security do about the protest, he again danced around a direct answer, but here's part of his response:

"The concerns expressed by a few people gathered in Ottawa right now are not new, not surprising, are heard, but are a continuation of what we've unfortunately seen in disinformation and misinformation online, conspiracy theorists, about microchips, about God knows what else that go with the tin foil hats."

Did our Prime Minister really go there?  Tin foil hats?   In a tone and with language unbecoming of a national leader, he denigrated millions of hard working, tax paying doctors, business owners, parents, truckers, Canadians of all walks of life who don't share his narrow, "acceptable" view.  I couldn't believe it.

And in the last question of the press conference, Trudeau was asked what message he has taken away from this peaceful three-day protest on the Hill.  He responded by saying that "the "fringe minority" is protesting, while "the vast majority are thinking 'Come on!'"; that they "know very well that the way out is not protesting the pandemic; it's getting vaccinated."

In other words, he hasn't gotten the message at all.