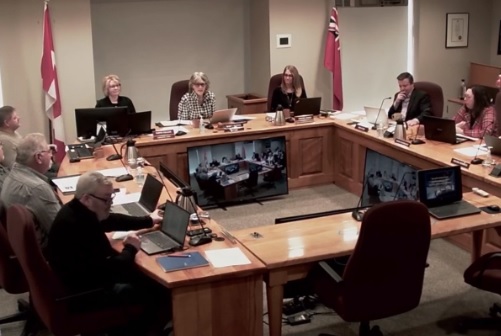 In the January 11, 2022, Huntsville Special meeting, Council approved the staff recommendations for the design and tree removal to accommodate the new washrooms for River Mill Park.

In the summer of 2022, local resident, Margaret Connor donated $300,000 to enable the Town to build public washrooms at the park. The exterior design of the washrooms is now complete, and Council will continue to direct staff with site preparations, including tree removals.

Staff recommend the removal of 5 old Evergreen trees beneath hydro lines near the washroom to ensure public safety, and brush clearing for a walking trail from West Street north, between Susan Street and Caroline Street east, into River Mill Park.

According to Director of Operations and Protective Services, Tarmo Uukkivi, “The trees we will be removing are what the arborist deemed as trees that are unsafe, such as large limbs falling off. This is a big liability to the Town.”

Uukkivi indicated that Hydro trimming around the lines is what has caused the trees to be malformed and unsafe, adding, “The result of clearing lines and shaping the trees is that the trees have grown in funny ways around the hydro lines.” These remaining limbs will hang where the new washroom will be, posing a risk to the high volume of people using the facility.

“The other thing that’s happened as a result of the line clearing work… These are Evergreens. When you cut off limbs and leave large portions of the tree, it is exposed and disease sets in. So, there are a number of trees that are actually bored into by animals. You can see that as well as potential rot setting in the cores… So, you have imbalanced trees that are top heavy or heavy on the north side combined with rotten cores,” adds Uukkivi.

Councillor, Jason FitzGerald, inquired about removing the hydro lines instead because tree removal costs will continue to climb. He suggested, “To eliminate the potential of removal of more trees to give us some more flexible plans to work towards in the future with.”

Mayor, Nancy Alcock, liked FitzGerald’s idea, adding, “We recently had a discussion with Lakeland about larger issues, and they are looking at areas where they would like to do some underground burying, and as we all know, it’s a bit of an issue with rocks and granite… It is something on their radar.”